A software design pattern is a solution to a commonly occurring problem. It is not a ready made piece of code or a recipe but rather think of it as a best practice. Implementation details can vary from language to language so don’t be alarmed when you see an implementation which differs from the one you’re used to.

Observer pattern, described in Design Patterns: Elements of Reusable Object-Oriented Software, is a design pattern with an intent to define a one-to-many dependency between objects so that when one object changes state, all its dependents are notified and updated automatically.

It is easier to think of it in terms of publishing and subscribing. Subscribers (also known as observers) subscribe to a publisher (also known as a subject or an observable) such that when the state of the publisher changes, it notifies all of its subscribers.

In this post I’m going to go over how to implement this classic pattern in Java.

The following is a class diagram of the proposed solution. 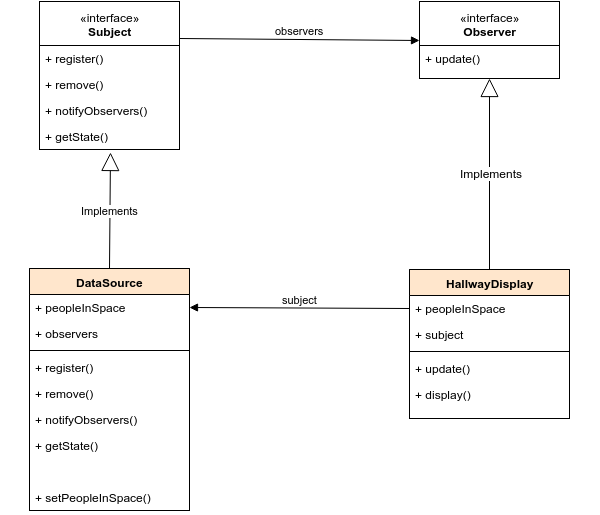 Firstly, we need to create interfaces for Subject and Observer.

Now that we have created the interfaces we need, let’s implement them. I’m calling the concrete implementation of the Subject interface DataSource since it is the source of the original data.

This class knows how many people are in space and has a list of all the observers it needs to notify when this number changes. register() and remove() methods can be used to add or remove observers. A method reference is used in notifyObservers() to update registered observers. Whenever peopleInSpace is changed by setPeopleInSpace(), notifyObservers() is called to notify all registered listeners about the change of state.

Next, let’s have a look at the implementation of the Observer interface. In this example the observer is a hallway display which shows the number of people in space.

The observer knows its subject and can get the current state of the subject.

A quick way to see if everything is working is to create a new DataSource object and register a new HallwayDisplay as its observer. When updating the number of people in space, HallwayDisplay should print out the updated data.

When two objects know very little of each other but are able to interact, they are considered loosely coupled. The observer pattern is a good example of loose coupling. The only thing the subject knows about observers is that they implement a certain interface. This is good because changes to either the subject or the observer will not affect the other. It is possible to add new types of observers at any time while never making any changes to the subject.

This is not the end. In the next post I’m going to look at a specialization of this classic pattern and show how to take advantage of lambda expressions.